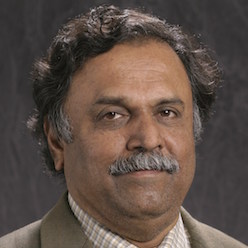 Dr. S.S. Iyengar is currently a Distinguished University Professor and Founding Director of Discovery Lab at FIU. The Discovery lab is a research infrastructure funded by various agencies focused on providing students (undergraduate/graduate) at FIU with a research experience into a wide variety of computer science domains. He served as the Director and was a Distinguished Ryder Professor of Computer Science at the Knight Foundation School of Computing and Information Sciences at Florida International University (FIU), Miami between 2011 and 2020. Prior to joining FIU, Dr. Iyengar was the Roy Paul Daniel’s Distinguished Professor and Chairman of the Computer Science department for over 20 years at Louisiana State University.

Dr. S.S. Iyengar is a computer scientist of international repute who has been a pioneer in multiple fields. Marked by his incredible record of success in the areas of world-class research, superb teaching, and excellence in community service, he has also significantly impacted industry, through his many discoveries and patents. His distinguished international and national research work have consistently been recognized by US government agencies, industry pioneers, and his research colleagues. His work has been featured on the cover of the National Science Foundation’s breakthrough technologies in both 2014 and again in 2016.

Dr. Iyengar has garnered multiple awards for his work and made fundamental contributions in a variety of areas that impact our lives today. His seminal contributions continue to be seen in places like Raytheon, Telcordia, Motorola the United States Navy, DARPA and other universities and research laboratories around the world.

Dr. Iyengar is a Member of the European Academy of Sciences, a Life Fellow of IEEE, a Fellow of ACM, a Fellow of the American Association for the Advancement of Science (AAAS), a Fellow of the Society for Design and Process Science (SDPS), and a Fellow of the American Institute for Medical and Biological Engineering (AIMBE), Fellow of National Academy of Inventors (NAI). Professor Iyengar is an IEEE Distinguished Visitor, SIAM Distinguished Lecturer, and ACM National Lecturer. He has received various national and international awards including the outstanding Test of Time Research (for his seminal work which has impacted billions of computer and internet users worldwide) and Scholarly Contribution Award from 2019 IEEE Congress on Cybermatics. 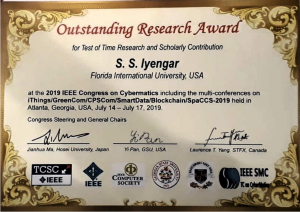 A detailed account of the impact that this algorithm and the various applications of this work is highlighted in the book titled “Fundamentals of Brooks-Iyengar Distributed Sensing Algorithm” published in 2020 by Springer.

The Times Network NRI (Non-Resident Indian) of the Year Award for 2017 was also given to Dr. Iyengar along with the most distinguished Ramamoorthy Award at the Society for Design and Process Science (SDPS 2017), the National Academy of Inventors Fellow Award in 2013, and the NRI Mahatma Gandhi Pradvasi Medal at the House of Lords in London in 2013 among others. Dr. Iyengar was awarded the Satish Dhawan Chaired Professorship at Indian Institute of Science (IISc) and a Distinguished Alumnus Award, the Roy Paul Daniel Professorship at LSU and also a very prestigious Distinguished Research Master Award and Excellent Faculty Award. In 1998, he was awarded the IEEE Computer Society’s Technical Achievement Award and he is also an IEEE Golden Core Member. He is also a Fulbright Scholar Award and IBM Distinguished Faculty Award recipient.

Dr. Iyengar received the Lifetime Achievement Award Conferred by ISAM(International Society of Agile Manufacturing ) IIT-Banaras Hindu University for his lifelong contribution to the fields of Engineering and Computer Science, December 17, 2012.  [Picture 1, Picture 2] .He also received the 2019 IEEE Intelligence and Security Informatics (ISI) Research Leadership Award for his contribution in the area of distributed sensor systems, 2019. [link] and the Lifetime Achievement Award for his contribution in Research and Education in the area of Distributed Sensor System at 25th IEEE International Conference on High-Performance Computing, Data and Analytics, December 2018. [link]

Dr. Iyengar has been involved with research and education in high-performance intelligent systems, Data Science and Machine Learning Algorithms, Sensor Fusion, Data Mining, and Intelligent Systems, and other inter-disciplinary areas. Since receiving his Ph.D. degree in 1974 from MSU, USA, he has directed over 60 Ph.D. students, 100 Master’s students, and many undergraduate students who are now faculty at Major Universities worldwide or Scientists or Engineers at National Labs/Industries around the world. He has published more than 600 research papers, has authored/co-authored and edited 26 books. His h-index is 63 with over 19000 citations. His books are published by MIT Press, John Wiley and Sons, CRC Press, Prentice Hall, Springer Verlag, IEEE Computer Society Press, etc. 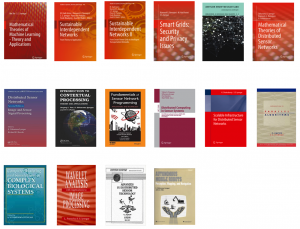 One of his books titled “Introduction to Parallel Algorithms” has been translated into Chinese. During the last thirty years Dr. Iyengar has brought in over 65 million dollars for research and education. He has providing the students and faculty with a vision for active learning and collaboration at Jackson State University, Louisiana State University, Florida International University, and across the world. Dr. Iyengar’s career is a distinguished one, marked by his incredible record of success in groundbreaking research, inspirational teaching and excellence in community service. It is his consistent drive to fight for and promote the minority and underrepresented groups which is his passion. 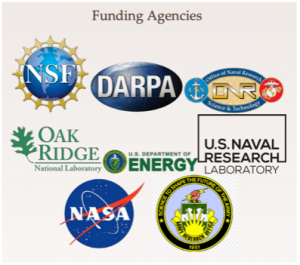 (ABET-accreditation) for several Computer Science and Engineering Departments across the country and the world. Dr. Iyengar has also served as a research proposal evaluator for the National Academy of Engineering. Dr. Iyengar is developing computational measures for predicting DNA mutations during cancer evolution, using wavelet analysis in cancer genome research, and designing smart biomarkers for bioremediation.  His inventions have significantly impacted biomedical engineering and medicine. He recently patented a simple, low-cost device for early intervention in glaucoma, and was involved in early detection of lung cancer by developing a 4D motion model jointly with Southwestern Medical School. He is also the founding editor of the International Journal of Distributed Sensor Networks, and he has been on the Editorial Board of many IEEE Journals/Guest Editor including Transaction on Computers, Transactions, and Data Knowledge Engineering, IEEE Signal Processing, IEEE Software Engineering, IEEE Computers, ACM Digital Threats Research and Practice, ACM Computing Surveys, Journal of Computers and Electrical Engineering etc. Dr. Iyengar continues to be very active in multiple professional conferences and workshops in the areas of his research interest. In 1988, when he and his colleagues discovered “NC algorithms for Recognizing Chordal Graphs and K-trees” [IEEE Trans. on Computers 1988]. This breakthrough result led to the extension of designing fast parallel algorithms by researchers like J. Naor (Stanford), M. Naor (Berkeley), and A. A. Schaffer (AT&T Bell Labs).

Dr. Iyengar is a computer scientist of international repute, and a pioneer in the field and has made fundamental contributions in the areas of information processing for sensor fusion networks, robotics and high-performance algorithms, all relevant to critical event detection systems as seen in following:

He has been a driving force and a major contributor in FIU, LSU and other universities he has been associated with to reach global recognition and excellence. During his tenure as Director at LSU, the

Computer Science Department raised to achieve the top 30 in the NRC Ranking and similar is the case with his tenure at FIU.

Dr. S S Iyengar is also a proud co-founder of the company “Flexible IR” that works on designing, creating and deploying tools for Incident Response that are flexible and robust. He provides technical guidance with $1 remuneration. The company’s motive is based on the assumption that A FAST RESPONSE during an incident is highly required. The company partners with its clients to quickly contain an ATTACK OR BREACH happening in the company. They also provide a guided methodology using flexible runbooks to speed up the incident response process. With their IN-PREMISE setups, they make sure that the client data never leaves their system or organization. The company enables careful collaboration and virtual teams during breaches.

The products and services offered include:

The company has also proposed a New Kanban based Incident Response product that has been welcomed by Honeywell and is to be presented in the reputed “2018 PSIRT Technical Colloquium” in Atlanta, USA on February 27-28, 2018.

More details about the company and the products can be found on their website http://flexibleir.com/

He has also initiated a Gifted and Talented Program with the National Institute of Advanced Sciences (NIAS) with FIU faculty. For details, visit identifyingtalents.org