FIU Discovery Lab is the innovation center for Florida International University’s School of Computing and Information Sciences. Discovery Lab was created in Spring 2012 to provide students with the hands-on experience needed to solve real-world challenges, develop student-led research opportunities, foster students’ entrepreneurial skills, and train a new generation of IT professionals who reflect the diversity of South Florida. Ultimately, the discovery lab’s focus is to develop products for the marketplace while giving students the experience of innovation, creation, and transition to entrepreneurship.

The discovery lab provides a platform to develop many new ideas. The lab is comparable in its mission to labs at top universities. We are educating entrepreneurs, sustaining research and developing products that can be commercialized. We are training the next generation of students with the 21st-century skills they need to succeed.

Train the next generation of IT professionals who reflect the diversity of South Florida, strengthening the school’s dedication to facilitating access to its programs among historically underrepresented minorities and groups. 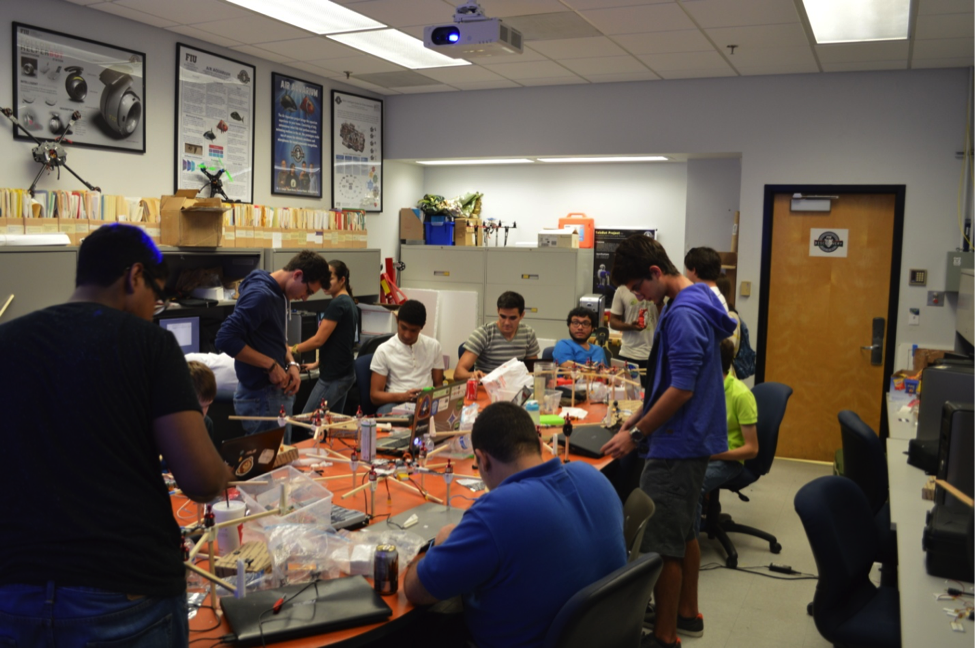 Distributed University Research
The Discovery Lab, as a research and educational program specializing in the areas of computational aspects of intelligent autonomous mobile robots and sensor networks, also provides an infrastructure to promote collaborative research among universities and research organizations both nationally and internationally. Through a series of memorandums of understanding, as well as cooperative research and development agreements, the researchers at the Discovery Lab are developing an international network of cooperative research that includes industry in universities in Canada, Latin America and as far away as India.

Our Research
Research scientists, engineers, and students at the Discovery Lab are currently performing advanced research in a variety of areas including intelligent systems, advanced security systems, autonomous mobile robots, telepresence robots, virtual reality and smart grids. The use of advanced robotics and sensor networks at home and industrial applications presents dynamic opportunities for research discoveries.

Intelligent Home
The Discovery Lab Team has been conducting research on Intelligent Home Systems (IHS), focusing on the quality of life and security of the home environment while providing solutions that increase comfort and entertainment. The system provides enhanced security as well as improved energy efficiency. IHS is based on home automation and robot technology areas Discovery Lab researchers are focusing on advanced research in the areas of architectures for the efficient control of network-enabled devices and mobile assistant robots, intelligent active sensing, and interactive passive sensing, on reliable and secure private area networks. The systems also include integration of knowledge sources in the distributed and complex systems, as well as knowledge discovery for real-time “smart” assistance.

Smart Access Control (SAC) System
The Smart Access Control System or SAC observes and records users daily behavioral activities to develop activity patterns the provide adaptive security. From the analysis of the collected data, the system selectively chooses certain users for additional layers of authentication procedure and quickly isolates those individuals who might pass through scrutiny by security personnel. Due to this adaptive feature, the SAC system not only minimizes delays and provides more convenience to the users, but also enhances the security measures for entry and access.

Autonomous Pipeline Inspection Robot
pipeline based applications have become an integral part of life. However, knowing that the pipeline systems can be largely deployed in an inaccessible and hazardous environment, active monitoring and frequent inspection of the pipeline systems are becoming highly expensive when relying on traditional maintenance systems. Robot agents of been considered as an attractive alternative. Although many different types of pipeline exploration robots have been proposed, all have suffered from various limitations. The Discovery Lab Team has been developing the design and implementation of a single module fully autonomous mobile pipeline exploration robot, called FAMPER, which can be used for the inspection of 150 mm pipelines. This robot consists of four wall press caterpillars operated by two DC motors each. The speed of each Caterpillar is controlled independently to provide steering capability, allowing the robot to go through 45-degree elbows, 90-degree elbows, T-branches, and Y-branches. 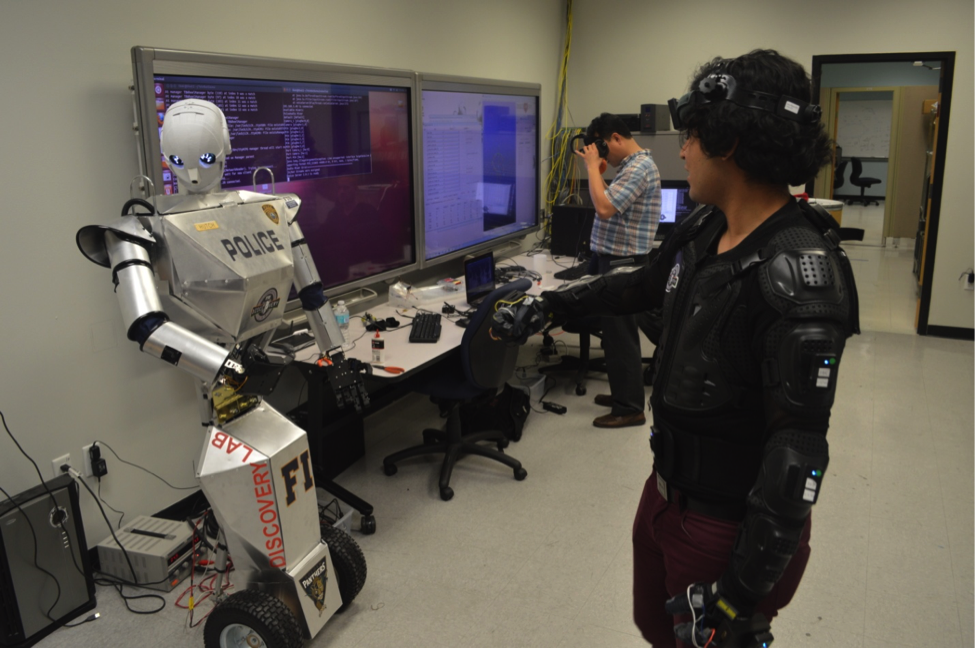 The Future of Law Enforcement is NOW!—Telebot
Telebot is a semi-autonomous robot incorporating technologies in telepresence to provide an extension for disabled military veterans and law enforcement officers who may have been injured in the line of duty. Using Telebot and telepresence technologies, officers who may have lost arms or legs can still serve their communities by remotely operating Telebot. When Telebot is deployed on the streets as an extension of their presence, the officers can conduct many of the same duties they previously conducted. Telebot offers them a presence where they can see, touch, feel and respond to their environment as if they were actually there.

The Discovery Lab Telebot was created in less than three years as an extremely low-cost telepresence robot. FIU’s Telebot has been prominently featured on the Discovery Channel, Fox News, TELEMUNDO, and UNIVISION, as well as in other national and international news media as the future of law enforcement.

The Discovery Lab’s Telebot appeared as part of The Empire Magazine. The article was published with the premiere of the Robocop movie and was called “The real Robocop” by Conrad Emmett. They very much emphasize not only the similarities of Telebot and Robocop but the differences that could allow the Telebot to be even more satisfying and productive for society, as is the fact that one person could control several Telebots all the around the country from the comfort of their homes. 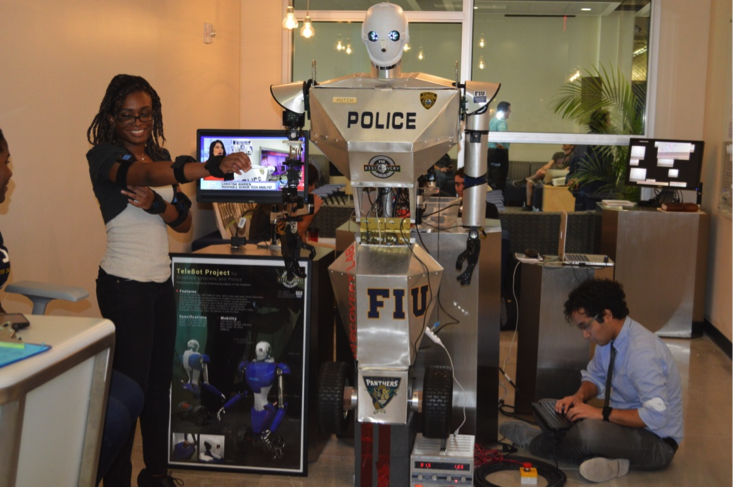 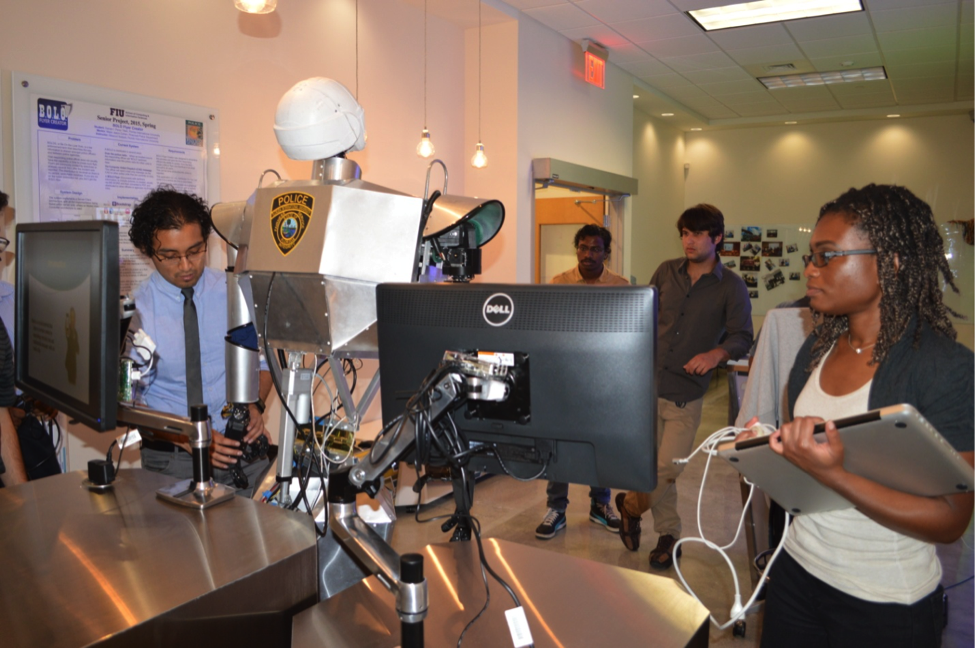 Students are using exciting new tools such as 3-D printers, semi-autonomous and autonomous robotic tools and techniques, and a wide variety of control devices, including iPhones and iPads to create rich multimedia control and analytic systems. Discovery Lab researchers use the latest 3-D design tools such as AutoCAD studio in 3-D Max, as well as a variety of other tools to provide a platform for in-house innovation and development.

Discovery Lab has been generously sponsored by grants from State Farm, which has designated FIU as one of only 20 universities in the nation where they recruit exclusively. Our most recent grant of $50,000 was one of only four such grants this past year by State Farm awarded in the area of IT systems.

Other sponsors include; DARPA, NSF, Apple, US Department of Energy, IBM, DOW, Exxon, Shell, Air Force Institute of Technology, and the US Naval Research Laboratory.