Analytical Framework &  ProtocolsPrincipal Investigator: Rajgopal Kannan.
Other Principal Investigators: S.S.Iyengar, Sudipta Sarangi.
Starting Date: June 2000
Duration: June 2000 – September 2001
Sponsor: DARPA/ITO SensIT Program
Project Summary: This project proposes the development of the formal theory behind the analysis of the Reliable Query Reporting (RQR) problem in an adaptive sensor network. We will consider the problems of static-RQR, adaptive-RQR, and continuous-RQR by mapping them onto a graph topological domain. By qualifying the parameters governing individual and communal (group) sensor node behavior, we will derive game/decision theoretical techniques that control the actions of intelligent sensor nodes, leading to the dynamic formation of RQR topologies based on local topological decisions.

The average funding will be $1 million per year over a three-year period. Two additional years of funding will be possible to bring the total award to 5 years. The competition drew 416 white papers, from which 158 full proposals were received. After a thorough evaluation by technical experts, 48 of these proposals were found to be suitable for funding. Dr. Phoha is the Primary Investigator. 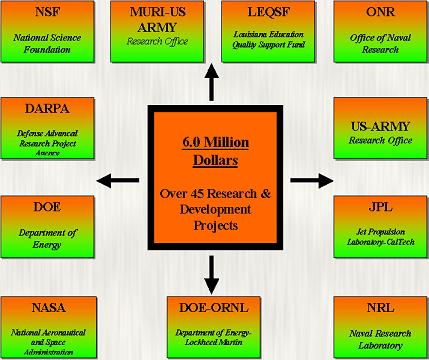